Underlying much of what I discuss in this blog is a life experience that I sometimes describe as having a “weird brain.”  I have one myself.  The more I experience, the more I see this as important not only for my self-knowledge, but also for my observations of society.  Someone who seeks to Change the World needs, after all, to compare her experience of the world to that of others—both those who are like her and those who are different.

There is a certain awkwardness in talking about what is generally referred to as being “gifted.” This, however, is essentially synonymous with what what I mean by a “weird brain.”  That means that if I want my thoughts to reach similar people who will be relying on Google searches and WordPress tags to find my content, I’m going to have to pull out the G-word.  Therefore, I feel compelled to ensure that readers understand what I mean by it.

Let’s put the key takeaway up front: It is not a statement about intrinsic human worth.  This is why, if it came up at all, I always referred to myself as being “weird,” a somewhat self-denigrating word, because I wanted to avoid elitist implications.  But giftedness has to do with that nebulous concept we call intelligence, and intelligence is so highly valorized in our culture that the implication that someone has more of it than others is indeed fraught.  One can see why it would seem like a “gift” to have more of it, never mind that we still have some trouble pinning down just what intelligence really is.

One could also say (as, for instance, this clinical psychologist writes) that the word “gifted” was poorly chosen.  It’s partially at fault for reactions like this blog post by a mother who feels for the children who don’t get chosen for the valorized program; she is therefore moved to declare that “every child is gifted.”  On one level, I hear her.  I was moved by this post, written by the mother of an “average” kid who is obviously a delightful girl who has a lot to give to the world.  One wonders if using a different word would help kids who didn’t get those coveted letters not feel bad.  Don’t worry, kids: it’s just about having a qualitatively different type of brain.  A brain that does do some things more easily, yes, but also has its own drawbacks, and that in no way negates the things that your brain does well. (I’m not making this up, by the way: according to these researchers at Johns Hopkins University, it is quite literally a different sort of brain.)

On the other hand, I’d note that it’s not only about the awkwardness of the G-word.  Regardless of what word you put on it—giftedness, high ability, academically talented, et cetera—people are going to perceive it as elitist if they get that it has to do with scoring well on tests but don’t prod further into what it means.  It’s worth exploring all the things that go into deciding what “intelligence” really is and who qualifies as “gifted,” though for now, that’s a digression.

To the extent that the word itself contributes to negative reactions, perhaps metaphor can help.  Paula Prober, a counselor and blogger who specializes in gifted adults, came up with the term “rainforest mind.” The idea here is that people’s minds are like different biomes, and it’s silly to say that any biome is generally superior to another.  At the same time, rainforests have their unique issues, and Paula’s blog deals with those issues.

I like Paula’s metaphor a lot.  I also came up with one of my own.  It involves stars.

There are lots of different types of stars, and most of them fall into a grouping called the main sequence.  Take a look at the chart above: the main sequence is the diagonal line from the upper left to the lower right.  Main sequence stars vary in spectral type from the blue type O stars through types B, A, F, G, and K until you reach the red type M stars.  It recently struck me that you could say the folks we call gifted start around spectral type A—equivalent to Sirius, which appears to be the brightest star when seen from Earth—and extend through the rare O stars on the far left, representing those profoundly gifted people who score 180+ on ratio IQ tests.  These most massive stars eventually explode into supernovae, which create the heavier elements that make up our entire world. It’s easy to stand in awe of those stars!

What I like about this metaphor is that it draws attention to the reason I am moved to write about “giftedness.”  It’s not the part about being “bright,” though that’s what most people will take away on first glance.  It’s the experience of burning intensely.  To see more about what I mean, you need look no further than the Amazon reviews of what for me was a life-changing book on the gifted experience, Living With Intensity.  For instance:

As a child, I was tested as having an IQ in the profoundly gifted range. I have never felt particularly smart, though – and at some level, I was convinced that my parents just didn’t understand the test results. […] I originally bought this book as a parenting resource, but instead, I cried reading the first two chapters as I remembered every time in my life that people have told me that I am too sensitive, I talk too much, I talk too fast… No matter what I do, I am just TOO MUCH.

So that’s the experience of an O star–someone scoring as profoundly gifted.  Now I’d like to look elsewhere on the Main Sequence to demonstrate that my interest in giftedness, and this metaphor, is not a value judgement.

What if I asked you to name your favorite star in the Milky Way?  Do you have one?  Let me give you mine: a “mere” type G star called Sol. While it will never explode into a supernova, there’s still something special about this star: it is the only star we know to sustain life. And astrobiologists suspect that it’s precisely because of its position in a sort of Goldilocks zone on the main sequence—not too hot, not too cold—that it’s able to do so, unlike those O, B, and A stars, which are so intense (see, for instance, overexcitabilities) that they often annoy other stars, who find them tedious and weird.

In case you aren’t into either astronomy or Latin, Sol is more commonly known as the Sun.  There is, clearly, no reason that the Sun should feel inferior.  Some stars sustain life.  Others create the heavy elements from which life is formed.  As a life form warmed by Sol and made of elements created in supernovae, I am grateful to both.

There’s one other reason I like this metaphor: it gets back to the different wiring of the intense brain.  See, there are two known processes stars can use to fuse hydrogen into helium (which is the source of stars’ energy).  Stars up to those slightly bigger than our Sun use the proton-proton chain, while larger stars use the CNO cycle, in which carbon, nitrogen, and oxygen as catalysts to propel the fusion process.  The details of each process aren’t that important to the analogy; the main takeaway is that there are different ways of fusing—or rather, of thinking, just as O, B, and A brains actually have a different cognitive style.  In my head, unrelated tidbits of information are always colliding with what I’m otherwise pondering, which is where my digressions (variously known as “creative insights” or “irrelevant tangents”) come from.  Other people seem to have a more step-by-step model of thinking (which is a strength in certain contexts, as I can attest from experiences in which I’ve failed and felt stupid), for which the proton-proton chain seems a ready metaphor.  Both result in the fusion of helium, but one type of star is going to think the other kind’s inner workings are “weird.” 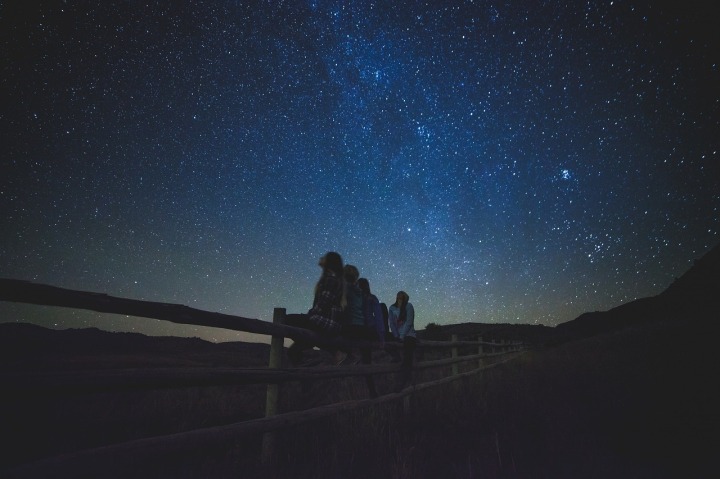 The reason that gifted kids get identified and, if they’re lucky, pulled out and handled differently is that lumping people whose brains work differently together can lead the kids with the “weird” brains to experience profound and lasting pain and confusion.  In my case, after spending kindergarten through third grade in a Montessori school (which was, for me, idyllic), I spent a year being picked on and occasionally bullied before I got to take a test that let me spend fifth grade in a class where they sometimes let me do what I wanted and kids were more or less “nice.”  Those who aren’t identified, however, can be left thinking they really are just weird, or even defective.  (Or they might try to convince their moms that they’re sick every morning, like I did in fourth grade.)  Noting that O, B, and A brains work differently doesn’t mean F, G, K, and M stars don’t also deserve a high quality education suited to their own manner of fusion, and any advocate for gifted programs would say the same.

Once they’re adults, O, B, and A stars will continue to have experiences—including challenges—that are of interest to other O, B, and A stars.  Some people might pull out the tedious trope of the “special snowflake,” meant to malign a person who allegedly revels in feeling unique.  This, however, would miss the mark.  Reading the experiences of other children and adults identified as gifted have made me feel that I’m actually not “special”—i.e. weird—at all: my experiences fit a known pattern, a path that others have trod.  And that is reassuring in an often lonely world.

That’s why I wish to discuss these experiences and challenges with others who have shared them. On top of that, an understanding of how my needs and goals may be similar to or different from those of others is relevant to much of what I write about here.  So since this may come up in other posts, I just want to say up front that A, B, and O stars generally aren’t looking to be valorized.  We’re all just fusing helium in the way that’s natural to us.

This post is a part of Hoagies’ Gifted Blog Hop: The G-Word.
Follow the link for others’ takes on this topic.

13 thoughts on “On the G-Word, Weird Brains, and Stars”